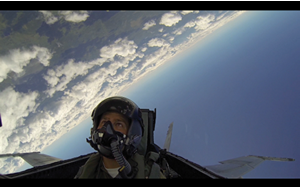 Michael Markowsky was born and raised in Calgary, Alberta, where he graduated with
honors from the Alberta College of Art. In 2002, he received his Masters of Fine Art in
Painting from Art Center, in Los Angeles, California. He currently teaches drawing at
Emily Carr University of Art + Design, on Granville Island in Vancouver.
Markowsky’s art has been exhibited in museums and galleries in New York, Los
Angeles, San Francisco, Montreal, Vancouver, etc., where it has been shown alongside
work by Ken Lum, Robert Rauschenberg, Ed Ruscha and William S. Burroughs.
His artwork is often featured on television and in print media, including NBC, CBC, CTV,
GlobalTV, ShawTV, Globe and Mail, etc.

Michael Markowsky
“As an ‘Artist-in-Residence’ at the Mackie Lake House, I would like to work towards the
completion of a short film and paintings, both based on my recent super-sonic flight in an
CF-18 ‘Hornet’ fighter jet plane. During this 1 ½ hour flight I made 100 drawings of the
landscape.

Additionally, I would like to work outside to produce a large 10’ x 10’ foot oil painting of
the clouds and sky, as I saw them while travelling faster than the speed of sound in the
fighter plane. I have worked on paintings outdoors in this way before: unraveling a giant
roll of canvas off of a plastic tube onto the grass in parks (and on the sand at the beach),
where I would paint for a few hours and then roll it back up and walk away.
I believe that one of my responsibilities as an artist is to share my passion for art with as
wide and diverse an audience as possible, so that the public begins to feel more
comfortable visiting art galleries and museums, and more inclined to interact with the art
community. Often artists spend their energies ‘preaching to the choir’ and I feel that Fine
Art cannot survive in contemporary society if we don’t make an effort to engage with
people directly.

I’m often the first artist that someone has really spoken to, and I really like being able to
overturn some stereotypes and misconceptions people have about artists and art. I like
answering questions about the nature of my work and hopefully that has positive, lasting
effects for the broader art community after I leave, in that those same people will feel
more inclined to approach other artists they may know of but haven’t met before.” MM